Today, we will step onto a road that will lead, painfully and inevitably, to a hill just outside Jerusalem and to the witness of a political execution that we do not understand.

There is a busy week ahead. There are feet to be washed, and a mob coming, and a church to be made gleaming, and I am actually working all seven days of it, too, and if I were to look closely around the cathedral I’m sure I’d find that all manner of loveliness has been stashed away, in case, in a week’s time, just in case, we might wake up early and find that an impossible thing has happened.

I can’t think about all of that too hard. This is a week where at least trying to take things one day at a time is the only way I can keep from going mad. One of the qualities that I least understand but most admire in my clergy friends is their ability to write an Easter sermon before the Easter Vigil.

And I didn’t believe it.

Easter Day is Easter Day, a festival filled with joy and light and wonder, and, where I celebrate it, Prosecco. The events that led up to it were just something that happened — they happened two thousand years ago, and I knew the story and I understood generally what had gone on and I truly saw no reason to get mixed up in it any more than that. I knew what had happened, and my dwelling on it was hardly going to change that, or me, or the world.

But the following year I was around and I was a server by that time, anyway, and I thought I might as well see what this Holy Week business was all about.

Still, I didn’t believe him.

Imagine how taken aback I was four days later to taste the hot salt of tears streaming down my face as I sat on the cold tile by the Garden, as the foot traffic of a bank holiday weekend in the west end of Glasgow clattered by outside the walls and his friends all ran away and left him. And to taste them again in the empty echoing hollowness of a sanctuary that come Friday morning has been desecrated. The pain of realising that I hadn’t understood anything — and that I still don’t, not really.

The events of the next eight days are raw and real to me, every single time. The thing I didn’t understand, back then, was that the story of the events leading up to Easter Day were a story of the world we live in and of right here and right now. The thing I still don’t understand is how we keep ending up back here. That’s what I keep asking myself. That’s what I’ll spend long hours over this week thinking about: how the world keeps ending up here, and how we can make the world a better place.

And as for that thing about Easter Day and its joy and light and wonder?

It turns out I hadn’t understood that either.

That the ecstasy is nothing without the agony. That the Hallelujah Chorus is only notes on a page unless its set against the backdrop of the wail of the blues. That you can’t properly savour the Prosecco until it’s washing away the bitter taste of hyssop. And that the crack in everything is how the light gets in. 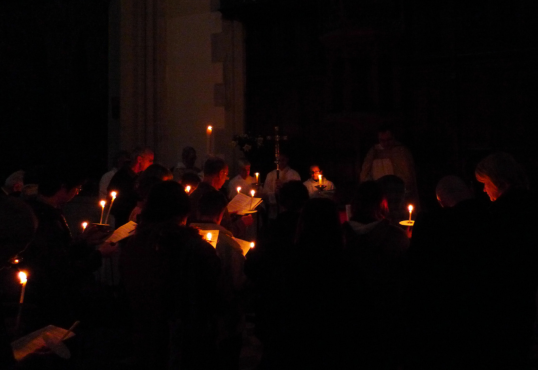 That promise was true. It has continued to be true. It will be true again this week, and its truth will be in ways that I cannot possibly begin to know yet.

In accordance with GMC Good Medical Practice 2013, I write under my real name and will provide my GMC number on request.

The stories I tell about my work in the NHS have been anonymised, composited, and fictionalised.

I do not give medical advice over the Internet, and I do not intend anything I have written to be taken as such. I write in a personal capacity and do not presume to speak for any organisation that I work for, nor for anyone other than myself.

“I could tell you my adventures – beginning from this morning,” said Alice, a little timidly. “But it’s no use going back to yesterday, because I was a different person then.”